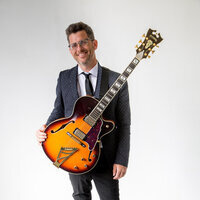 Peter Curtis is a dazzling guitarist and composer who has performed and recorded with notable jazz and blues musicians including Claudia Acuna, James Carter, Freddy Cole, Taj Mahal, Barbra Morrison and James Moody. He has played in some of the top jazz clubs in Southern California as well as in New York’s Carnegie Hall.

Curtis will present "Christmas With Your Jewish Boyfriend: Christmas Music by Jewish Songwriters." At this event, Peter Curtis will present a multi-media program/lecture-recital that is an informative and entertaining history of the Jewish songwriters who wrote Christmas songs interspersed with his jazz guitar interpretations of those songs.