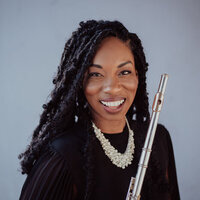 Southern Miss alumna Brittany Trotter is the featured guest artist for the X-Southern Flute Festival. Trotter leads a diverse career as an educator, soloist, and collaborator. She is the Assistant Professor of Practice in Flute and Program Director of Woodwinds at the University of the Pacific’s Conservatory of Music in Stockton, CA.

Trotter has been awarded first prize in numerous national and regional competitions including competing as a semi-finalist in the 2017 Fischoff National Chamber Music Competition. She has performed in the flute sections of several orchestras and is equally versed in post-classical contemporary and electro-acoustic music. She regularly performs, teaches, and serves as a guest lecturer throughout the United States. She has performed and presented at numerous music festivals including the National Flute Association Convention where she was a featured soloist in the 2020 virtual summer series celebration concert series.

Trotter is the recipient of the NFA’s 2020 Graduate Research Competition for her dissertation entitled, Examining Music Hybridity and Cultural Influences in Valerie Coleman’s Wish Sonatine and Fanmi Imen. Her passion for engaging with underrepresented communities through classical music has led her to collaborate with several local nonprofits in the greater Pittsburgh area, including a featured artist in residence with Unisound of Pittsburgh.