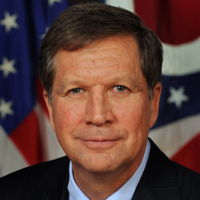 John Kasich was elected to Congress at thirty and served for eighteen years before he was elected to two terms as Governor of Ohio. During his storied career, he has been a strong advocate for fiscal responsibility and a champion of bipartisan solutions to health care reform, immigration, and international trade. He unsuccessfully sought the Republican nomination for President in 2000 and 2016. He has hosted a Fox New program, is a CNN contributor, and has written five books, including the New York Times Bestsellers Courage is Contagious (1988) and Every Other Monday (2010) and most recently It's Up to Us: Ten Little Ways We Can Bring About Big Change (2019). Throughout his career, Governor Kasich has argued that we need to reach beyond the politics that divide us and to find solutions to our most pressing societal problems through civility and decency. In 2020, he endorsed Democrat Joseph Biden for President. On February 23, the former governor will discuss the importance of empathy in politics and the role of faith, family, and free enterprise in the future of conservatism.

Zoom webinar and login information will be posted before the event.

Free and open to the public

Register
This event content is powered by the Localist Community Event Platform.